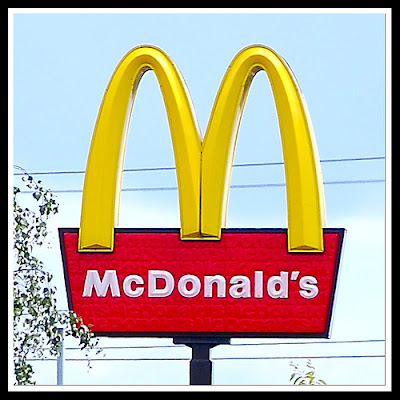 Another Reason To Stay Home

I got a postcard from Qwest in the mail today. It offers free services to those with their high-speed Internet service. I don't have that service, I get my Internet service from Visi but do get DSL via Qwest. (The postcard was specifically addressed to me, not "occupant.") They promote their free Wi-Fi at "thousands of coffee shops, bookstores, and restaurants nationwide." Having recently bought a laptop, I was curious as to what was available in my neck of the woods. I entered my zip code (55408) into Qwest's Wi-Fi search engine. The results? A Barnes and Noble store which doesn't serve coffee or other beverages, two Starbucks (I find their coffee mediocre), and three McDonald's locations. McDonald's? Hey, I frequent the Golden Arches but honestly can't remember the last time I sat down in one and ate a meal - I'm a drive-through guy: Get the gutbomb home and eat it while reading the sports page.

I entered a downtown Minneapolis zip code (55401) and got similar results. While tempted to sit down and have a meal at McDonald's to see if folks are working on their laptops while scarfing down their extra-value meals, I think it'll be easier to just throw this postcard into recycling. Real nice effort, Qwest.
Posted by Bill Tuomala at 1:20 AM

Note: I compile each issue of Exiled to run a certain number of pages in print. Due to space constraints, I ended up cutting the following essay. I think it's weaker than what the made the grade anyway - I'm trying a little too hard in this one. At times I think I pretty much wrote it so that I could throw the last sentence in there. Yes, 750-plus words, all in the service of one final sentence.


Due to unforeseen circumstances I was recently forced to listen to the classic rock monolith KQRS for three hours straight. Hence:

John Mellencamp. I have come full circle with this guy. In high school, I thought he was one of the biggest dorks on radio. I still find "Hurts So Good" and "Jack and Diane" grating. But a few years later I genuinely enjoyed the Scarecrow album. By 1989, I totally loved the Big Daddy album. So I gave Big John a pass when he was dismissed as a sub-Springsteen heartland rocker. But then a couple of years ago he sold "Our Country" – a boring and bad song – to Chevy and in tandem they tainted months of sports-on-TV viewing by blasting the ad featuring the song constantly, so much that I pined for the days of Bob Seger's "Like A Rock" domination. I damn near got tendonitis from hitting the mute button during every commercial break on Sunday afternoons. And I advise listening to the Impressions "This Is My Country" as an antidote to Mellencamp's song.

Phil Collins. He's five feet tall, bald, and of no exceptional talent in singing or drumming. Somehow he was a superstar a couple of decades ago because: 1) "In The Air Tonight" used echo and was used on the pilot episode of Miami Vice, and 2) He was edgier than Rick Springfield. Man, the eighties were fucked up and we're still paying the price.

Joe Cocker. One thing classic rock fans are real stuffy about is the post-Beatles claim that artists have to write their own songs. Sure Little Richard, Chuck Berry, Bo Diddley, and the Everlys all wrote their own songs long before the Beatles, but nobody seems to acknowledge this. It's pretty much become accepted history that the Beatles were the first rockers to write their own songs, probably because part of being a classic rock snob (I think this might be the same as being a "rockist," but I'm not sure) is ignoring fifties rockers and kissing up to old British acts. But what Cocker songs do you hear on classic rock stations? Diminished covers of great tunes like Traffic's "Feelin' Alright" and the Box Tops' "The Letter." Plus The Wonder Years intro song, which wasn't so hot in its original Beatles form and the only good thing Cocker did with it was have Jimmy Page play on it. Yet classic rock fans never seem to complain that Joe Cocker became famous by singing other people's songs. If he were black and American, he wouldn't get the same free pass.

The Doors. Jim Morrison is summed up best by the Lester Bangs character in Almost Famous: "A drunken buffoon posing as a poet." Truly, there is not much more to add with this clown and his band, they are so boring they're almost beyond my vile. Does anybody over the age of fifteen actually buy into their mystical/mysterious/Jimbo-as-shaman shtick? I guess the Doors could be described as "lounge act buffoons posing as a rock 'n' roll band." My first draft of this contained the line: Who still listens to this crap? But a version "The Doors" surfaced a few years ago with Ian Astbury of the Cult doing the vocals and they did a tour. Who exactly paid money to see this, I'm not sure … Hey! Finally, the Doors are actually mysterious!

Eric Clapton. He sounds like he has a cold when he sings. He makes the blues mind-numbingly boring. And he has come up with just one great musical idea: The opening riff to "Layla." Oh wait, that was Duane Allman. The only good – actually it was great – thing this joker ever did was to quit the Yardbirds because they were "too commercial." (This is the same man of integrity who: 1) would go on to join Blind Faith in a transparent attempt at creating a supergroup to sell mega amounts of records and, 2) would title an album Money and Cigarettes and then promote said album via a tour sponsored by Camel.) The result of his leaving the Yardbirds was that Jeff Beck replaced him and instead of simply being whiteboys playing the blues, they became one of the most daring, exciting, and innovative bands of their time. Claptonheads claim E.C. has passion and Beck is all technique, but when Beck's technique is so powerfully awesome – "Mister You're A Better Man Than I", "Heart Full of Soul", "Shapes of Things", etc. – I gotta quote Joan Didion: "Style is character." If you're still a big-time fan of Eric Clapton you are the whitest person on your cul-de-sac.
Posted by Bill Tuomala at 2:13 PM

And What Evenutally Happened To That Empire?

The Strib's headline about the Windows 7 operating system?

"The Empire Strikes Back."

I think I laughed out loud when I first saw it last night. I love the part about "making Apple look stupid":

Windows 7 also could be Microsoft's long-awaited chance to strike back at Apple, whose PC guy vs. Mac guy advertisements lampooned Vista as hopelessly complicated and flawed.

"Windows 7 also is designed to make Apple look stupid, because it's much better than Vista and much leaner, too."

The installation process isn't a simple matter of popping a disk into the PC. Data files and programs may be eliminated during the upgrade, so consumers must first copy their data onto external disk drives or finger-sized flash drives.

I think I know how Twitter works now ... maybe. Anyway, my lack of knowledge didn't stop me from setting up a Twitter account. You can find links to my Twitter updates on the sidebar to the right. Oh boy.
Posted by Bill Tuomala at 12:22 AM

Back to the joy of having no regular coworkers. When I had a corporate job, I had a photocopied excerpt from Douglas Coupland's Generation X taped to the in/out box on my desk:

Air Family: Describes the false sense of community experienced among coworkers in an office environment.

I used to try not to laugh out loud when people I worked with said "the people in this office are like another family" and a couple of these people were miffed that I had this Air Family definition out in the open. (Actually one of these people was almost visibly upset, sheesh.)

Being one that usually comes up with witty rejoinders ten minutes to twenty-four hours too late, this time I was only fifteen years late:

Coworker: "The people in this office are like another family."