Tuesday Tuneage
Albert Washington and the Kings - "Hold Me Baby"
1969

This one never lets up; incessant horns, keyboards, rhythm section, while Cincinatti soul singer Washington lays it all on the line. Oh, and Lonnie Mack on guitar and now I can hear why so many add him to the Hendrix/Beck/Cropper axis of string-and-mind-bending guitarists who got their start in the sixties. I mean .. geez Louise, after taking in Mack's brilliance on this tune it makes me want to take a Yngwie Malmsteen cheap shot.

Speaking of shots, the B-side of "Hold Me Baby" is titled "I'm Gonna Pour Me A Drink." Yessir.
Posted by Bill Tuomala at 6:43 PM
Labels: Tuesday Tuneage Tuesday Tuneage
The Swinging Machine - "Do You Have To Ask"
1966
American garage band rock 'n' roll of the mid-sixties was, in the words of Dave Marsh: "Somewhat bluesy, somewhat psychedelic, always amateurish, and for the most part, utterly unself-conscious in (its) naivete." Garage rock has lived on all these decades later as an American tradition, both as music and as a social bond. Lester Bangs: "Call up a bunch of your buddies, get some six-packs or some weed, plus a guitar or two, a bass or drum kit, and you've got instant fantasies about instant stardom."
An "instant stardom" gambit that was played by quite a few of the original generation of garage rockers was when they attempted to ape an artist far, far above them on the Rock Ladder. A fun parlor game to play with some mid-sixties garage rockers is to match them up with what sixties music icon they were trying to emulate. To wit:
The Count Five's "Psychotic Reaction": The Yardbirds
The Knickerbockers' "Lies": The Beatles
The Chocolate Watchband's "Are You Gonna Be There (At The Love In)": The Rolling Stones
Mouse's "A Public Execution": Bob Dylan
The other night on Bill Kelly's show on SiriusXM 21, I heard The Swinging Machine doing "Do You Have To Ask" and I realized that sixties garage rock had someone trying to be The Animals. Sure, the keyboard could be a little more prominent in the mix, but the singer bears an uncanny resemblance to Eric Burdon, there's that verge-of-chaos background singing going on, and like with The Animals: No matter the subject matter there is always a hint (or more) of menace. Two minutes of rock 'n' roll genius.
Posted by Bill Tuomala at 10:02 PM
Labels: Tuesday Tuneage 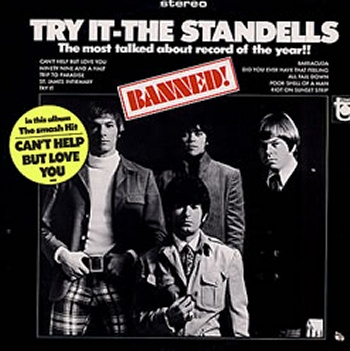 Tuesday Tuneage
Rancid - "Roots Radicals"
1995
In a discussion with a younger friend last week, I told him how the people who are about five-to-ten years older than me didn't care for the likes of Green Day, The Offspring, or Rancid when they emerged in the mid-ninteties because they weren't "real punk." Those Generation Jonesers are pretty funny: Not only was punk around for over a decade before they discovered it (and I'll take the Standells over the Ramones, but that's another meander), they think their falling for punk in the mid-seventies was some sort of equivalent of the civil rights movement ("...I had blue spiked hair and some guys who liked Skynryd and Zeppelin made fun of me every day...") Oh, boo hoo.
The result of this conversation was that it convinced me to load up Rancid's ...And Out Come The Wolves on my iPod for a listen. One of my favorite albums from the mid-nineties, but one that I hadn't listened to in a few years. I fired it up on Saturday night while sitting down to write in my notebook. A few tracks into it, I had to turn it off. Because it was now dated? Because the forty-six-year old me doesn't dig it like the thirty-year old me? No, I had to turn it off because I wasn't getting any writing done due to constantly tampering the urge to grab a beer and dance around the living room.
Later that night I tracked the whole album and revelled in its fist-pumping, anthemic, wanna-singalong power and glory. All they need to do for its upcoming twentieth anniversary edition is instead of adding bonus tracks ... do the opposite ... shave off the last few tracks (they smell of filler), get it down to a slick thirteen tracks, and clock it in at a punchy thirty-four minutes.
Now onto the next subject: Does Green Day have a greatest hits?
Posted by Bill Tuomala at 3:29 PM
Labels: Tuesday Tuneage
Newer Posts Older Posts Home
Subscribe to: Posts (Atom)