Carly Simon's biggest hit covered by a group of LA hair metallers. Forgotten by everybody except fans of the group (count me in, "Babylon" off their debut album is one of the earliest Beastie Boys imitations of out the gate along with Antrax's "I'm The Man"), I remember hearing it a lot on Z-Rock back in the day. God bless that station. Again. This song was orginally released on a compilation album put out to honor Elektra Records on its fortieth anniversary. Lenny Kaye put the double album together, this tune is quite the nugget. 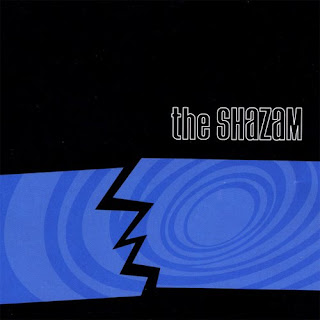 Shamelessy catch power pop by a band I've always meant to listen to more of. This is the #1 song in my collection to play on those mornings where I hit the bedtime tea (not a euphemism) hard the night before, am dreamed out or have hit the dreaded dream-within-a-dream scenario (Inception was fiction?), and can't quite get to one hundred percent of waking up. Five Hour Energy? Nah, 2.25 minute pop song!

And some days I change the chorus to:

I've got a telephone
but I'm ignoring the whole world
Posted by Bill Tuomala at 11:12 PM
Labels: Tuesday Tuneage

March 1990. I'm pacing my living room, listening to some grainy AM signal I miraculously picked up on my boombox. North Dakota is playing Wisconsin in hockey, and a win means UND finishes second in the WCHA. This is important as it means if they go on to advance to the WCHA Final Four, they are a home team. Also, it puts hated archrival Minnesota into third. UND coach Gino Gasparini is pulling out all the stops to get a win, his team goes into overtime but he pulls the goalie for an extra attacker because at the time it looks like two points are needed in the race for second instead of one.

... And then at some point I lose the grainy AM signal. This is pre-Internet, so while you think I would wait for the next morning's paper to find out the score, no. I either called the Grand Forks Herald sports desk or the UND student union hotline to get a score.

Ten years or so later, for some reason I can't get audio of a UND at Mankato State hockey game on the Internet. But I find out that the game is on some AM station out of Mankato. I take a beer out to my car (open container, shhhhh) parked on the street and listen to part of that game on a grainy AM signal.

... And then at some point I lost the grainy AM signal. Thankfully, I would be able to get a final score on the Net later that night.

I'm typing this on Sunday, March 11th. Tonight, Wisconsin at the University of Denver in the rubber game of the opening round of the WCHA playoffs. Why should I care? Well, the winner dictates who UND will playing on Thursday in the opening round of the WCHA Final Five, and at what time. I may have to reorganize my work schedule if UND plays Thursday afternoon. Other things: beer and pizza purchases, workout schedule, laundry, etc. will be affected by whether UND plays in the afternoon or evening.

So what have I done tonight?

1) Saw if free audio of the game was available online without any annoying registration steps.

2) Looked up what radio stations in Wisconsin and Denver carry UW and DU hockey and looked to see if these stations were on my IHeartRadio app on my iPod Touch. Couldn't find the game this way.

4) Checked score updates on the College Hockey News and USCHO apps on my iPod Touch.

All because I have the need to know who is getting out of Denver tonight and is headed for St. Paul later in the week. Because I have the need to know whether UND plays Wisconsin Thursday afternoon or Saint Cloud State Thursday night. The technology has changed, but I'm still the young man with a can of beer in my hand, chasing down some grainy AM signal.
Posted by Bill Tuomala at 11:09 PM
Labels: Tuesday Tuneage

All I have is one lasting memory, of saying something a little too loud at last call during last weekend's imaginary bar bull session, just hours after buying and tracking A Different Kind Of Truth:

A tip of the hat to my pal Chuck Tomlinson for prompting me to buy the new Roth-reunion Van Halen album. (Chuck did this via Twitter, so take that Franzen!) I just assumed it would be a long sleepwalk through an arena slumber. Instead, it's a noble effort to bring back the Best Band In The Land of thirty-some years ago. It's all here: killer riffs, danceable beats, sweet harmony vocals, Diamond Dave. I shoulda known something was up when Kool & The Gang was booked as the opening act on the latest VH tour. Talk about signs, right?

Rob Sheffield says it best, that the album is closest sonically to Women And Children First. Any complaints on that? Didn't think so.

One more thing: For finding a fountain of youth for a generation of us, Van Halen will be Time magazine's Persons Of The Year. Book it.
Posted by Bill Tuomala at 10:48 PM
Labels: Tuesday Tuneage
Newer Posts Older Posts Home
Subscribe to: Posts (Atom)