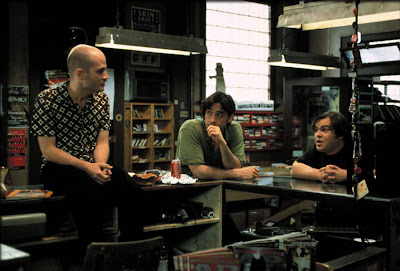 Last week's post on spending some time in record stores on Saturday afternoon got me to thinking of some of my favorite record store memories. Three (for now):

- An afternoon in a summer of the mid-eighties when I was living at my parents' cabin near Detroit Lakes and working in DL at a Hardee's, I stopped by a record store that was for a short time located on Washington Avenue. I came across a used LP of Pete Townshend's All The Best Cowboys Have Chinese Eyes for a dollar. It looked to be in great shape, so I marched to the counter to snatch it up. There was some snafu with the clerk though. I think I only had a twenty on me and he didn't have correct change and wouldn't sell it to me. I asked him if he could hold it for me if I ran across the street to the M&H station and made some change. He agreed, and I ran across the street in the rain to make change. This was a lucky break as there was a rather cute girl from UND that I knew working at the M&H who gladly broke my twenty and chatted me up a little bit. Running back to the record store in the rain and not minding if my next college semester started again soon, I approached the counter. The clerk said: "I feel bad for making you go out in the rain to get the change I didn't have. I'll sell you this album for fifty cents."

- One afternoon after school my junior year in high school, I was at Mother's Records on Gateway Drive in Grand Forks. There was a clerk who worked there who was a classic seventies leftover. He had long blonde hair and glasses and seemed like he'd be a record store employee lifer. I was in a far corner of the store from the cash register surfing through the used vinyl and suddenly Lifer starts yelling: "Whatya wanna hear?" Even though I was pretty sure there was hardly anybody else in the store (my back was to the rest of the store), I pretended he wasn't yelling at me. Then again a yell: "Whatya wanna hear?" I kept my head down and kept flipping through the records. Finally, louder: "HEY MAN, WHATYA WANNA HEAR?" I worked up some nerve, turned around to see Lifer staring at me and yelled back (though not as loud): "Whatya got??"
Lifer: "You can choose between the latest from Van Halen or Rainbow."
I chose Rainbow (Gimme a break, "Stone Cold" was burning up the charts!), and that's what we heard.

- One summer evening in the late seventies, my older brother let me tag along with him on a trip to Budget Records & Tapes in Grand Forks. This was the original Budget Records in GF, it was up on North Washington on the east side of street in a dingy little storefront. It would later move to a cleaner space in a little strip mall on South Washington. My brother was buying the latest release by some band or artist, who it was I don't remember. Let's say it was Jackson Browne for story's sake. My brother brings his J. Browne LP up to the cash register and hands the cashier some cash. He is owed sixty or seventy cents or so in change, but the cashier hands him back a dollar bill. My brother is quick to point out the cashier's error, that he had given him too much back, but the cashier says something like: "Keep it, man. I can't handle that change stuff." I was young and naive, maybe this place was also a head shop??
Posted by Bill Tuomala at 11:02 PM
Newer Post Older Post Home