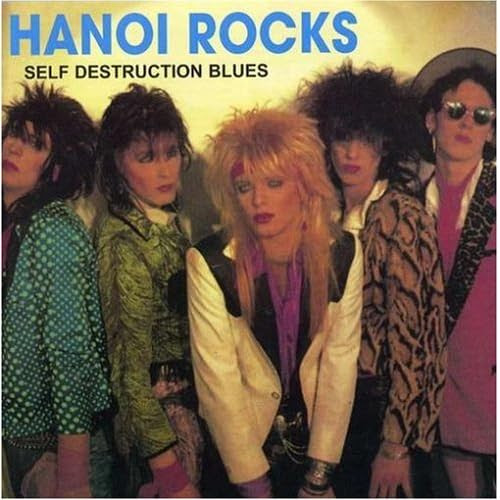 Hanoi Rocks were a group of Finns influenced by the New York Dolls (bassist Sami Yaffa is in the Dolls' latest incarnation), and never lived up to their sleaze-rock promise. Bob Ezrin - who had worked wonders with Alice Cooper and Kiss - couldn't even get them up and running at full raunch when he produced their Two Steps From The Move album. Though to be fair, they were crucial in the development of Guns n' Roses, at least looks-wise.

I tried to like 'em, I really did. Kinda felt I had to, with them being my fellow suomalainen and all. I bought three of their albums, one of them on vinyl even. But I never listen to them these days. At least I managed to fit a reference to them in a fantasy I wrote about opening a Finnish bar.

As for this tune, why does the narrator make breakfast for two? He had already said that his gal had left him the prior Monday. Is it some leftover instinct - unaffected by heartbreak, he went ahead and made breakfast for the two of them? Maybe he just had a big appetite. Self-destruction can make a guy hungry, that's why I hesitate to keep potato chips on hand in my pantry.
Posted by Bill Tuomala at 10:45 PM
Labels: Tuesday Tuneage

A beer project is loosely defined as any project that is mundane enough that you can have a beer or two while doing it to make it a little more enjoyable. “Beer project” was coined by my good friend Bjerk, I believe the first time he used it around me was when we were repairing the windshield on his Glastron speedboat. And by “we,” I mean that I held the windshield in place while he drilled new holes. (I'd write something self-deprecating about how little I did during this project, but come to think of it ... it was a lot more than your typical second on a UND dorm maintenance project.)

It is while up north at the cabin that the beer project takes a special place. You don’t want to take too much time or have to drive into town for supplies because your ultimate goal is to get back on the water, so improvisation becomes key. This is how my brother and I constructed a “Mayor Country” sign (this was during a time of anti-mayor strife and my brother and I are of the mayor’s “vote early, vote often” constituency ... well, we would be if we had elections up there) from an Old Style Draft box, a magic marker, and some garden stakes. During that same era, I fixed the opening latch on my classic Schmidt cooler - one of those big aluminum ones with a padded cover for sitting and a bottle opener attached - with a latch designed for a window. It was while constructing a landing outside the garage that my Dad uttered the classic line: “We’re going to do something. It might be the wrong thing, but we’re going to do something.” (That landing actually wasn’t a beer project and Dad designed it rather well, but that quote sums up the Beer Project Mentality perfectly.)

So with Bjerk’s Glastron and the windshield ... This was in the days before the worldwide web, the iTunes Store, YouTube etc. freed singular songs from their album constraints. And I really had a hankering to hear ZZ Top’s “I’m Bad, I’m Nationwide.” I never heard it on Twin Cities radio, it wasn’t one of the three songs by them that KQRS played, and we didn’t have a hard rock station in the Twin Cities. So I called Bjerk up during the week and asked if he had the ZZ Top album with “I’m Bad, I’m Nationwide” on it. The next weekend he brought a cassette of ZZ Top's Deguello, a boombox, and some cans of Stroh's Light down to his dock. And that was our soundtrack as we fixed that windshield. A well-executed beer project on a sunny summer afternoon.
Posted by Bill Tuomala at 11:28 PM
Labels: Q98 Classic, Tuesday Tuneage 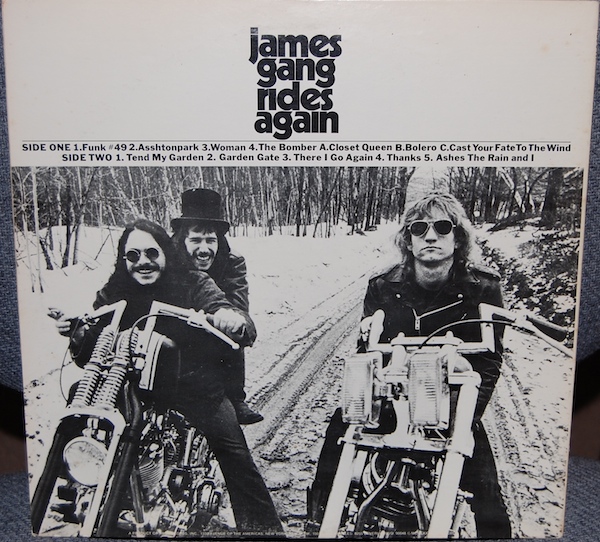 When I was in my mid-teens, I bought a couple of small paperbacks at the B. Dalton store in Grand Forks. They were short rock biographies published by Tempo Books and both were authored by John Swenson. One was about The Who, the other was about The Eagles. The Who went on to become my obsession in high school, ignored through much of my twenties and thirties, and now once again one of my all-time faves. The Eagles? Well I tried selling the Eagles book last time I moved but the bookstore wouldn’t buy it and now I’m glad I kept it because it has a photo of John Belushi wearing a Vikings windbreaker in it. The Eagles book also doubles as a bio of Joe Walsh and his original version of the James Gang. Swenson wrote that the James Gang blew away Pete Towhnshend when they opened for the The Who circa 1970 and this was enough for me to seek out James Gang LPs in high school. Swenson's descriptions of them - as I recall, and it's been thirty years or so - seemed to place the James Gang in a high tier of the great also-rans in American rock history. They were a homer-or-strikeout band to me, but when they went deep it was brilliant hard rock.

For instance, their second album, James Gang Rides Again, featured a tune called “The Bomber.” which was a montage of:
1) A killer proto-heavy metal piece called "Closet Queen" (Closet what??) (Which makes me wonder what these lines exactly mean ... "So I began to notice some things I hadn't seen before/That's what's brought me here knockin' on your back door");
2) Maurice Ravel's "Bolero"; and
3) Vince Guaraldi's "Cast Your Fate To The Wind."

The inclusion of “Bolero” was no doubt influenced by “Beck’s Bolero” from a few years earlier. But Ravel’s estate forced the band to delete it from future pressings, so only the first 10,000 copies of Rides Again LPs featured "Bolero." Of course, the only reason I was aware of this "Bolero" controvery was because had I read that Eagles book - which described the Ravel estate's legal action - right around the same time as the movie 10 was popular and "Bolero" was a significant part of that movie. But I'm not sure I ever even saw that movie, it starred that tiny British guy with kinda long hair who I understand some people thought was funny and it also starred Ursula Andress Linda Evans Bo Derek.

I had mentally misplaced all this "The Bomber" stuff until the other night when for some reason I remembered it while listening to “Beck’s Bolero” in the dark on headphones. This lead me to YouTube, which featured The James Gang’s version of “The Bomber,” complete with the controversial "Bolero" excerpt fully intact. This made that YouTube moment A PROTO-METAL HOLY GRAIL! I hadn't been this excited over a proto-metal finding since: 1) Discovering a copy of the Stooges' quasi-bootleg Metallic K.O. in the racks at Let It Be in the mid-nineties. (Note, the album is not titled Punk K.O.); and 2) Hearing some of Rocket From The Tombs' recordings - officially released as the album The Day The Earth Met The Rocket From The Tombs - at Treehouse Records early last decade. I bought it on CD and came to find out that it was made up of recordings from various RFTT bootleggs. (One of those bootlegs was titled A Night Of Heavy Music - note, not titled A Night Of Punk Music.)

So what, you say, a minute-and-a-half of some Ohio band's interpretation of a tune was missing and now you found it. Big deal. Well here's another story, maybe it'll clear things up as to my state of mind, maybe it won't: As a teen, I bought a Canadian version of The MC5's Kick Out The Jams LP hoping as an import it would have the REAL intro to the title track. But I was bummed that it had the cleaned-up "brothers and sisters" intro to the title track. Imagine my joy when I bought the album on CD in the nineties and got my long-promised, never-heard "motherfuckers" version ... ANOTHER PROTO-METAL HOLY GRAIL ...
Posted by Bill Tuomala at 9:46 PM
Labels: Tuesday Tuneage
Newer Posts Older Posts Home
Subscribe to: Posts (Atom)