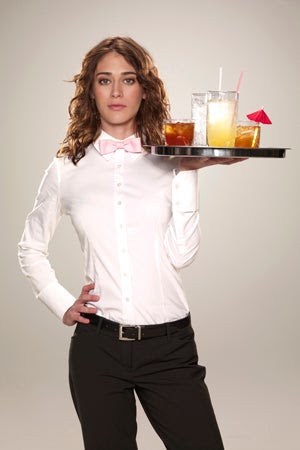 If you are in the mood for a sometimes raunchy and almost-always hilarious sitcom, check out Party Down. I watched season one a few weeks back via the Netflix instant viewing option and laughed out loud more than once each episode. It originally aired on Starz and may be available via on demand if you have that channel.

It deals with a group of caterers in Los Angeles who all have dreams to do something in showbiz someday. Except maybe Constance, who seemingly knows she's past her prime but brings her "A" game of optimism anyway. (She's played oh-so-perfectly by the great Jane Lynch.) And Henry, who had the misfortune of peaking early career-wise in a beer commercial and now just wants to bartend and remain anonymous. (He's played by Adam Scott as the straight man, blankly but gamely facing the catering circus.) Otherwise the dreamers are the narcisstic prettyboy, the geeky writer (Bill Haverchuck fans take note on this character), the wanna-be-overachieving team leader who constantly underachieves, and the major hottie funny girl.

Throw in superb guest appearances (generally one solid guest star per episode) by Ed Begley Jr., Steven Weber, J.K. Simmons, Rob Corddry, and Kristen Bell (plus Joe Lo Truglio making his Superbad role look like a mere audtion for his turn here) and you have my favorite new sitcom. E! Online says it has been renewed for a second season, so you know it must be true. Party Down, check it out.
Posted by Bill Tuomala at 11:51 PM

In those months before I discovered Guns n' Roses, one hard rock band I pinned hopes on was The Cult. "Love Removal Machine" was a hard rock gem – part AC/DC (the riff), part Led Zeppelin (Ian Astbury emits a Plant-like "baby baby baby" at one point), part sixties garage rock (a reference to "psychotic reaction.") And even Astbury yelling "boogie!" at some point couldn’t diminish the tune's greatness. Follow-ups on the old KJ104 like "Lil' Devil" and "King Contrary Man" led me to buy the Electric album.

I hadn't listened to the album in years, though when I deejayed I toyed with bringing the LP to the club to play "Love Removal Machine." Having imported all of my CDs into my iTunes a few months back, I'm currently in a period of rediscovering forgotten aspects of my music collection. So last week I broke out Electric for a late-night headphones spin on my turntable. The opener "Wild Flower" – a deifying ode to a woman – still slays. "Lil' Devil" is still fun. But "King Contrary Man", a song I once loved now comes off as a kinda dumb sell-your-soul-at-the-crossroads tune with lyrics such as: "zany antics of a beat generation." Worse, track two on side one is "Peace Dog" which is truly stupid and just stupid (i.e. not stupid fun like "Louie Louie" or "Smells Like Teen Spirit.") Lyrics like "peace is a dirty word / she used to be a painted bird / and war she's a whore" grate. Allmusic.com's review of the album nailed it: "What happens when the Doors are used as a model in the wrong way." (Astbury toured with a version of the Doors a few years back, plus the Doors had a similarly-titled song "Peace Frog".) Also, Astbury sings of wanting a B-52 (and not Kate Pierson, sadly) to "drop your love on me." Except he pronounces it "Bee Five Two." Dumb Brit. I like to imagine American producer Rick Rubin chuckling in the control room, but just letting Astbury go on and on. Hey, you can't produce Run-DMC every year, right?

I didn't make it through side two. After "Love Removal Machine," which is still awesome, they attempted to cover "Born To Be Wild." After Steve Martin's take on Comedy Is Not Pretty!, said song should just be left alone. Electric is a mixed bag of an album, if you listen prepare to be handy with moving that stylus arm up and down.

(And earlier this week, I checked out the video for "Love Removal Machine", which I hadn't seen since back in '87 when I first heard The Cult. I remember one of my roommates at the time loved the Doors and was disgusted by Astbury's Jim Morrison-like look of leather and long dark hair, but don't remember much else. This 2009 time around I loved the rock moves that were certainly not approved by the music intelligentsia of the mid-eighties: Guitarists having fun, Marshall stacks, aforementioned AC/DC and Zep influences, Brits actually acting like meathead rockers and not fashioned-obsessed swishes, and a huge beer can pyramid. Plus certainly-planned continuity problems with wardrobe/guitars and the drummer actually has an action spot!)
Posted by Bill Tuomala at 11:47 PM

Rochester, Minnesota came up in a conversation today. I've only been there twice, both on business when I worked for Big Construction. As I recalled these trips, I realize I was sent to Rochester for pretty bizarre reasons.

Trip #1: The company had finished a project in Rochester and needed a certain document related to the final payment to be picked up in person, the mail or FedEx wouldn't do. So I drove to Rochester on this errand, even though it wasn't a project my division had handled. I think I was asked to do this as my workload was a little light at the time and none of the accountants at the other office wanted to do it. (There may have been some office posturing at play here. The guy who asked me was a supervisor at another office and likely none of his accountants wanted to admit they had time to take a day to go to Rochester. Me? Toss me the keys!) Ah, the age before cell phones were prevalent: I had to call back to the company to confirm I had made the pickup. The pay phone wouldn't take my long distance credit card, so I called collect.

Trip #2: The company was bidding on a project in Rochester and the estimator needed somebody to go to the pre-bid meeting and ask one specific question to the guy running the meeting. I remember I had to write the question down as I had no idea what I was exactly asking. (Rebar this, concrete that, blah blah blah.) Again, I don't remember why I was exactly asked to run this errand. I do know that the estimators held me in high esteem due to the praises of my estimator buddy Turk and I may have been specifically requested. (In fact, this same estimator asked me to turn a bid for him on my last day on the job - he said he knew I'd do one last good thing for him. I did as he asked.)

In both cases, it didn't take much arm twisting to get me to volunteer. Sit in the office pushing paper or take a road trip on a nice spring day (I think both trips were in the May/June timeframe), charge all that mileage and a lunch to the company, report back to the other office with my findings
and then head for home rather than fighting traffic to downtown? Easy choice for this kid.
Posted by Bill Tuomala at 9:39 PM

Monday I was on a conference call with a client and one of their clients. The 1-800 number I was given to access the call instead gave a recorded message directing me to another 1-800 number where I could "meet new people." My client emailed with the correct number, which I dialed and got into the conference call. I said hi, but was so tempted to add: "I liked that other number better, I almost got a date." But I kept my lips zipped.

Today I watched Pardon the Interruption while on the treadmill at the YMCA. The opening went like this:

"Pardon the interruption, but I'm Mike Wilbon. Two days before the Fourth of July, Bobby. You got your party plans ready?"

To which in the background, Tony Reali was heard to howl and start up with the USA! chant.

After PTI, I headed for the water fountain. I ran into a gal who used to work at Y, we always greet each other and sometimes make small talk when we run into each other. She asked me how I planned to celebrate the Fourth. I almost said "with cheap whiskey and illegal fireworks," but bit my tongue and instead mumbled something about watching the Twins that afternoon.

Dammit! When I am finally gonna unleash some of my "A" material (or Bob Ryan's)??
Posted by Bill Tuomala at 9:00 PM
Newer Posts Older Posts Home
Subscribe to: Posts (Atom)